Coorg is home to an evergreen rainforest, the origin of a mighty river Kaveri, unending omnipresent coffee plantations and lush green thickets, which makes it an apt landscape for the birds to congregate and a haven for bird watchers and nature photographers across the globe.

This unique setting at our resort in Coorg offers landscape and philosophy that draws you closer to the avian wonders. The glass paneled wooden cottages offer many opportunities to spot birds which not only takes your breath away with their occasional sight but also with their rhythmic orchestrated sound that soothes your soul.

Here is where the birds convene in the chorus. Whistling scarlet Minivets, Drumming black-rumped Flamebacks, highly arboreal Oriental White-eyes, Perched Malabar Trogon, Yellow-browed Bulbuls, Barbets and more, as Coorg is home to a quarter of all avian breeds in India and some of them being endemic species.

Our landscape spreads in about 40 acres of verdant forest and coffee plantation, with a natural river flowing within which gives you ample opportunities to spot Canary-flycatcher, the yellow oriole, the Malabar Barbet or even just a forest myna.

The mere climb into the woods is enough reason for delight. Roost of the nocturnal Ceylon Frogmouth at dawn and dusk may add to the experience, as you walk along the sentinel trees that has loomed over the plantations for over a century. Experience peace as the music of the birds drowns out all the sounds that ever plagued you. Join us as you take some time off the burdens of expectations and rejuvenate yourself. 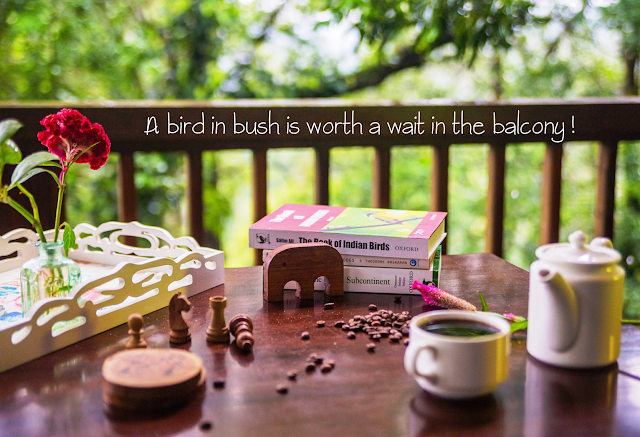 All you need is patience, stillness, mindfulness, early-rising and of course your binoculars, and our in-house guide will help you highlight the areas to spot birds.

So take the plunge to be an ornithologist even if you just turn out to be an amateur birdwatcher, at least you get to go some feet closer to these magical beings of nature and its ways.

So as Karnataka Tourism declares the year 2017 as the "Year of the wild" do take a vow to educate and sensitize yourself to the miracles and wonders of nature which our biodiversity hotspot offers you.

Indian Scimitar-babblers have long down-curved yellow bills, used to work through the leaf litter in search of their food which is mainly insects and berries. The long curve yellow, scimitar-shaped bills give them their name It is found in peninsular India and is found in a range of forest habitats.

This species is 18–20 cm long; it lacks the two elongated central tail feathers possessed by most of its relatives. This bird is small (about 8–9 cm long) with yellowish olive upper parts, a white eye ring, yellow throat and vent. The belly is whitish grey but may have yellow in some subspecies. They are easily identified by the distinctive white eye-ring and overall yellowish upperparts.

These birds are brightly coloured. The male has a slaty-black head and breast with a white border to the black bib separating it from the crimson on the underside. The back is olive-brown to chestnut. The wing coverts are black with fine white vermiculations.


The female lacks the contrasting black and crimson and has only a slightly darker head and breast that shades into the olive brown on the back while the crimson of the underside of the male is replaced by ochre. In both sexes, the beak is bluish as is the skin around the eye. The iris is dark brown and the feet are pale bluish. The nostrils are covered by tufts of filoplumes. The feet are heterodactyl, a feature unique to the trogons, with the inner toe turned backwards

This slim wagtail has a narrow white supercilium and a broken eye ring. The upperparts are grey and the yellow vent contrasting with whitish underparts makes it distinctive.. They forage singly or in pairs on meadows or on shallow water marshes. They also use rocks in the water and will often perch on trees.
White-Breasted Waterhen

Adult white-breasted waterhens have mainly dark grey upperparts and flanks, and a white face, neck and breast. The lower belly and under tail are cinnamon coloured. The body is flattened laterally to allow easier passage through the reeds or undergrowth. They have long toes, a short tail and a yellow bill and legs. Sexes are similar but females measure slightly smaller. Immature birds are much duller versions of the adults. The downy chicks are black, as with all rails
Yellow browed Bulbul

The yellow-browed bulbul is mainly yellow on the underside and olive above with a distinct yellow brow. They are easily located by their loud calls but tend to skulk within foliage below the forest canopy. They are found in pairs or small groups and call loudly. They feed mainly on berries and insects. The breeding season is during the dry spell before the monsoons, mainly January to May. The nest is a cup built in a low fork covered with moss and cobwebs on the outside, giving the appearance of a large white-eye nest, and lined with fine root fibers

White Cheeked Barbet is endemic to the forest areas of the Western Ghats and adjoining hills. Like many other barbets of Asia, these are green, sit still, and perch upright making them difficult to spot. During the breeding season which begins at the start of summer their calls become loud and constant especially in the mornings. The call, a monotonous Kot-roo ... Kotroo... starting with an explosive trrr is not easily differentiated from that of the brown-headed barbet. Like woodpeckers, the barbets perch on the trunk to hollow their nest. These barbets play an important role in forests as seed dispersal agents
Black Rumped Flameback

The black-rumped flameback is a large species at 26–29 cm in length. It has a typical woodpecker shape, and the golden yellow wing coverts are distinctive. The rump is black and not red as in the greater flameback. The underparts are white with dark chevron markings.
This species is normally seen in pairs or small parties and sometimes joins mixed-species foraging flocks. They forage from the ground to the canopy. They feed on insects mainly beetle larvae from under the bark, visit termite mounds and sometimes feed on nectar.  As they make hopping movements around branches, they often conceal themselves from potential predators. They adapt well in human-modified habitats making use of artificial constructions  fallen fruits and even food scraps.

The Malabar grey hornbill (Ocyceros griseus) is a hornbill endemic to the Western Ghats and associated hills of southern India. They have a large beak but lack the Casque that is prominent in some other hornbill species. They are found mainly in dense forest and around rubber, arecanut or coffee plantations. They move around in small groups, feeding on figs and other forest fruits. Their loud cackling and laughing call makes them familiar to people living in the region.


The grey-headed canary-flycatcher sometimes known as the grey-headed flycatcher (Culicicapa ceylonensis) is a species of small flycatcher-like bird found in tropical areas and western Ghats.  It has a square crest, a grey hood and yellow underparts. They are found mainly in forested habitats where they often join other birds in mixed-species foraging flocks